In the 125 years the Grindstone Island United Methodist Church has served its isolated community much has been written about this unique house of worship. Its true age is undeterminable due to the fact that the structure was moved from another location. It has been said that the church bell can be heard ringing in both the United States and Canada. At one point in history both the countries laid claim to the island. In the mid 1800’s a Canadian minister, Reverend Alexander Shorts traveled the St. Lawrence preaching the gospel and building churches. Normally known as a Circuit Rider, his mode of transportation was a steam launch instead of a horse. To his followers, he was the “Missionary of the Thousand Islands”. The Reverend dismantled an abandoned church located in the Rift on LaRue Island (Hill Island), Canada and rebuilt it very similar to the original construction, at the crossroads in Thurso on Grindstone Island, U.S.A. The land was donated by Canadian born Joseph and Clara Fowler Turcotte. After seven years of construction the first service was held in the church on Sunday, December 29, 1889, shortly after it was enclosed. The building was completed in 1890. In years past nothing went to waste. Abandoned sheds, houses and barns were moved or dismantled. No structure was overlooked because of its size or location.

This practice was common. What is unique is the fact that the Church served two separate communities on two islands approximately five miles apart, in two different countries, and operated under at least five different names. The name was lost to the ages when the church served the LaRue Island community in the early 1800s. Recollections indicate it could have been the LaRue Island Church or Church of the Rift. In 1890 records indicate the official name of the church on Grindstone Island was the First Congregational Church of Thurso, New York. It also served the community as the Methodist/Episcopal Church of Grindstone Island, and the Grindstone Methodist Church. At present the official name is the Grindstone Island United Methodist Church. Through the years the exterior changed. In 1910 a second steeple was added. Eventually both were removed to accommodate a double door entry in the middle of a new bell tower that still exists today. The interior has remained the same although the Sunday School Classroom in back of the altar, now serves as the Church History Museum which is home of Nellie Cummings Dodge’s antiquated pump organ, Reverend Short’s bible, an oil portrait of the Reverend’s daughter Addie, Reverend Robert V. Smith’s Circuit Rider Medallion – Symbol of the Traveling Ministry, a list of the clergy and a new addition. After five years of extensive research the Church History Committee completed a Time Line, documenting through photographs and editorial, the history of worship on Grindstone Island, spanning 185 years. 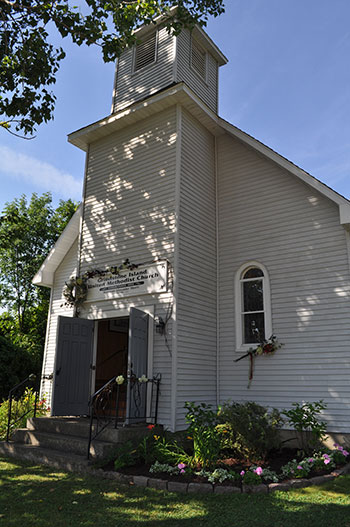 When the doors opened on the morning of August 2nd, 2015 the sun’s rays enhanced the patina of the ancient hardwood floors and grapevine crosses accented with silk apple blossoms hung on the end of each pew. The grapevine entwined, altar railing dripped with willow, shad tree blossoms, Queen Anne’s lace and red rose hips. In the center under the stained glass window of “Jesus in the Garden” hung a large handmade grapevine cross wrapped with barbed wire. A single white calla lily clung to the rustic symbol. The exterior of the building was decorated with the same vines and wild flowers that border the dirt roads and inhabit the fields of the island. Three large handmade grapevine wreath signs displayed the theme of the celebration, “Let the Circle Be Unbroken”. One was placed on the Church, the Grindstone Island Research & Heritage Center (Upper Schoolhouse) and Dodge Hall Community Center as a testament to how the three organizations have worked together creating a bond that has tied the island community together for generations.

At 10:15am sharp the bell started ringing. When the last person was seated by the ushers, the ten year old bell ringer took her place beside her grandfather in the last pew. For a few moments the parishioners sat silent. Anyone looking through the doors would be hard pressed to determine whether the year was 2015 or 1915. 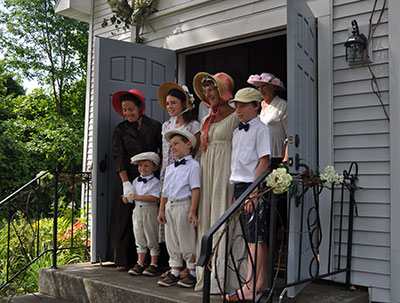 Most were dressed in vintage costume for the occasion. A petite woman in a long white dress stood up, then walked to the middle of the altar. When she turned to address the congregation the cameo broach at her collar gave her identity away. Addie Shorts welcomed everyone, then turned as the door in the back of the church opened. Out of the pages of history walked a very tall man dressed in black. He removed his top hat, took his place beside his daughter and introduced himself as the Reverend Mr. Alexander Shorts. After a brief accounting of his life as a servant of God he turned the congregation over to the presiding minister Reverend Jeffrey McArn.

The opening service had a quality of elegance and simplicity that is not often witnessed. One moment the church was filled with the music of Bach played by an organist from the Crane School of Music and in the next, the country twang of the banjo and guitar accompanied the choir as they sang the age old hymn “Will the Circle be Unbroken”. Adding to the significance of the celebration, a reading was done by Audrey Turcotte Lashomb, granddaughter of Joseph and Clara Turcotte, who gifted the land for the Church. That act of charity was bittersweet for Clara whose faith prevented her from attending any Church of another denomination. Although she watched in awe as the construction progressed, Clara never saw the interior. 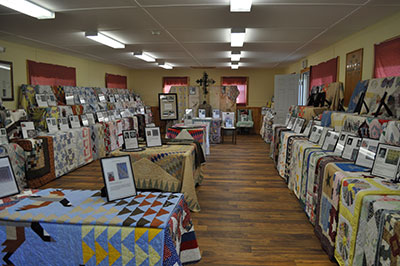 The island was a-buzz with activities and events during the week-long celebration which included a vintage quilt show, a social, two picnics and an old fashioned square dance at Dodge Hall which was once Hi Marshall’s store. The closing Sunday Worship service was a monument to the past. Many of the old hymns that have faded into history were played once again to the delight of the elder members of the congregation. Many nodded their heads and smiled knowing the circle would remain unbroken. Their children, grandchildren and great grandchildren would carry on. Ecclesiastes 1:9NIV says it best. What has been will be again, what has been done will be done again; there is nothing new under the sun.